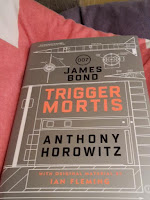 You know how everyone went bonkers over Go Set a Watchman a few months back? Well the book I’m about to review is my equivalent of that.
I should probably point out that whilst I watch at least one bond film a week I don’t read the books as often purely because there’s much more time involved and I have loads of other stuff to read .
Before I get into the review of Trigger Mortis let’s take a moment to go over the previous James Bond books because as I’ve said in a previous blog about Trigger Mortis (http://bookebloke.blogspot.co.uk/2015/05/trigger-mortis.html) the Bond books and yes , I'm including Fleming in this are a bit of a mixed bag.

Fleming – So far I’ve Read Casino Royale, DR.NO (audiobook), Goldfinger (audiobook), Octopussy And The Living Daylights (audiobook) and On Her Majesty’s Secret Service ( my favourite book of all time)  , I need to revisit them at some stage and read the rest of them whilst I’m at it.

John Gardner – read a few of them but not all of them. The ones I have read were reasonably good albeit not particularly memorable. (Goldeneye, Win Lose or Die and Icebreaker)

Raymond Benson – only read one and that was a novelisation of the world is not enough , also dipping in and out of The Facts Of Death.

Sebastian Faulks – I don’t know about anyone else but I get the impression he read the Fleming books, nicked some ideas and put them in a book. Some good moments but I don’t think I’ll ever read that one again. I also thought Faulks "writing as Ian Fleming " was nothing more than marketing bullshit. Not exactly the best way to mark Fleming's 100th birthday.

Young bond – Started reading them this year and I’m loving them. Charlie Higson should be writing the adult Bond novels.

Jeffery Deaver –  A lot of people hated Carte Blanche and I’ll admit that has put me off somewhat , I might give it a chance one day but I’m not rushing.

William Boyd – A good effort and arguably the best of the recent bond books, but like devil may care I can’t see myself reading it again any time soon ,it’s not that solo is a bad book but it’s no Any Human Heart.

Because of the mediocrity of the last few continuation novels I went into Trigger Mortis with low expectations, just to be on the safe side.

Trigger mortis takes place 2 weeks after Goldfinger (luckily references to that novel are explained) and it’s unique because for the first time ever in a continuation novel trigger mortis uses previously unseen material written by Ian Fleming.  The material in question is a treatment for an episode of a never made James bond TV show. The episode is called “murder on wheels “and is also a chapter title in the book.
The race sequence is fantastically written, a surprise when you learn that Horowitz knew virtually nothing about 50’s motor racing when he started to write the book.
Of course it wouldn’t be a bond novel without an absolute bastard of a villain, he is named Jai Seung Sin. Sin is aligned with SMERSH(precursor to SPECTRE).

The evil scheme this time round is outer space and the space race not to mention sin’s plan to wipe out half of New York (for fun) Like all bond villains sin is comically sadistic, and who lets his adversaries and henchmen play an ancient Korean card game that will force them to choose their own manner of death.
Bond is also forced to play this game (after a lengthy explanation of sin’s backstory) and is quite literally buried alive and you really do find yourself thinking ‘is Bond going to get out of this?’ it probably won’t surprise you to learn that he does. But not without a few tense moments.

The novel flows brilliantly, especially events at the Nürburgring and Sin’s various buildings and the climax which sees bond hanging off the side of a train whilst trying to defuse a bomb. The manner in which sin dies is particularly gruesome.

Apart from a couple of niggles, which are so small I won't even bother mentioning them Trigger Mortis is a triumph.
Horowitz has perfectly imitated Fleming’s exquisite eye for detail in all manner of things from food and wine, to cars, weaponry and Space Age technology. Action sequences in the novel exude the perfect balance of tension and excitement which make the novel such a thrilling and compelling read, but he also intersperses it with changes of scenery which provides some relief but also makes the reader hungry for whatever is next.
I hope that the Fleming estate sign him up for at least one more.

Oh, and thanks to riot communications, Anthony Horowitz and event magazine for the signed copy.

Edit : Since this review was written The Fleming Estate has announced that Horrowitz has signed up to write a second Bond novel ,which will once again use unseen Fleming material and will be published in 2018.