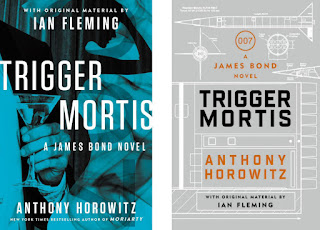 There’s always a sense of trepidation when a new bond book is announced, mainly because most of the continuation novels have been a bit hit and miss. Kingsley Amis and Raymond Benson turned out some good efforts as did John Gardner who exceeded Fleming’s output , producing  16 books (but later admitted he should have stopped after 6 or 7)
Sadly though in recent times the best thing about the recent “celebrity trilogy” has been the cover art.  Sebastian Faulks said that thrillers weren’t his cup of tea but took on Ian Fleming’s writing style of 2,000 words a day and finished “Devil May Care” In just 6 weeks, it wasn’t terrible but I can’t see myself picking it up again any time soon. That said I wouldn’t mind Faulks having another go at a bond book (even though he’s said he won't)

“Carte Blanche” by Jeffery Deaver moves bond into the 21st century and to be honest I haven’t read it yet so I can’t say if it’s any good or not.

“Solo” by William Boyd was a good effort and arguably the best of the recent bond books, but like devil may care I can’t see myself reading it again any time soon ,it’s not that solo is a bad book but it’s not exactly on a par with Boyd’s finest work “ any human heart” (in which Fleming appears).

Anthony Horowitz (of Alex Rider fame) is the latest author to write a Bond book but  this one is a little different because it features original material by Ian Fleming. The book is called “Trigger Mortis” and whilst I’m not mad about the title the plot (a summary of which I’ve copied and pasted from good reads) sounds fucking brilliant.

The world's most famous spy, James Bond, has just returned victorious from his showdown with Auric Goldfinger in Fort Knox. By his side is the glamorous and streetwise Pussy Galore, who played no small part in his success. As they settle down in London, the odds of Galore taming the debonair bachelor seem slim—but she herself is a creature not so easily caught.
Meanwhile, the struggle for superiority between the Soviet Union and the West is escalating. In an attempt to demonstrate Soviet strength, SMERSH plans to sabotage an international Grand Prix in the hot zone of West Germany. At the Nürburgring Racing Circuit, Bond must play a high-speed game of cat and mouse to stop them, but when he observes a secretive meeting between SMERSH's driver and a notorious Korean millionaire, it becomes clear that this is just the infamous organization's opening move.
An orphan of the Korean War, he has a personal reason for wanting to bring America to its knees. He's helping SMERSH decisively end the white-hot space race—but how? With the help of an American female agent, Bond uncovers a plan that leads first to Florida and then to New York City, where a heart-stopping face-off will determine the fate of the West.
This thriller has all the hallmarks of an original Ian Fleming adventure and features welcome familiar faces, including M and Miss Moneypenny. Horowitz delivers a smooth and seductive narrative of fast cars and beautiful women, ruthless villains and breath-taking plot that will leave readers hanging until the very end.

I know a few people are sceptical about Horrowitz taking on a bond novel but   he did a good job of his Sherlock Holmes books (House of Silk, Moriarty) and   the Alex Rider books are young bond novels in all but name.
Horrowtiz is bloody good at what he does and if they haven’t already the Fleming estate should sign him up for some sequels (I’m sure they’ve got some more original material knocking about) but if they don’t here are my top 5 choices for the next Bond author.
1. Lee Child
2. Simon Kernick
3. Peter Robinson
4. Charlie Higson
5. Jeremy Clarkson – see his column ‘hands off 007 or I’ll shoot you’ (The World According To Clarkson Volume 3)
- May 31, 2015